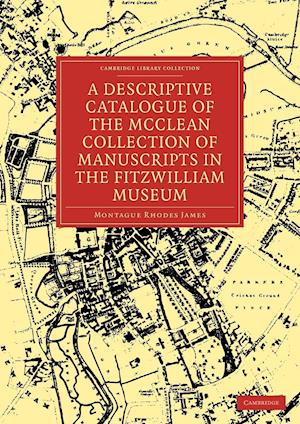 M. R. James (1862-1936) is probably best remembered as a writer of chilling ghost stories, but he was an outstanding scholar of medieval literature and palaeography, who served both as Provost of King's College, Cambridge, and as Director of the Fitzwilliam Museum, and many of his stories reflect his academic background. His descriptive catalogues of manuscripts owned by colleges, cathedrals and museums are still of value to researchers today. This volume describes the McClean Collection, bequeathed to the Fitzwilliam Museum in 1904 by Frank McClean, a Victorian polymath who was a civil engineer by profession but also pursued scientific research and the collection of antiquities, including the 201 manuscripts and 230 early printed books now in the Fitzwilliam Museum. The book is illustrated with 108 plates showing folios from the collection.

Forfattere
Bibliotekernes beskrivelse M. R. James' magisterial catalogue of the McClean Collection of manuscripts in the Fitzwilliam Museum, Cambridge, describes the 201 manuscripts bequeathed to the Museum in 1904 by Frank McClean. This book, illustrated with 108 plates, is still of value to researchers today. 108 Halftones, black and white