A Court of Silver Flames

indgår i serie A Court of Thorns and Roses 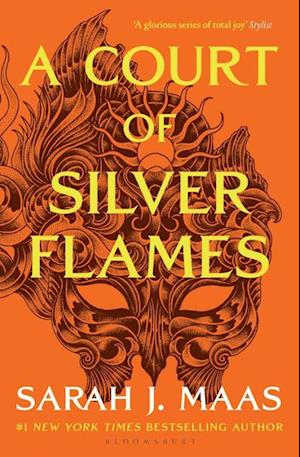 "A Court of Silver Flames" by Sarah J. Maas is the fourth book in the "A Court of Thorns and Roses" series. The thrilling story of the fae court continues, but this time with Feyre's spirited sister at its centre.

Nesta Archeron is a proud and fierce young woman, who angers easily and only forgives with a great reluctance. Ever since she was turned into a High Fae against her will, Nesta has struggled with the horrors of the war and everything she had to endure. With all this happening, it is not easy to find herself a place at the otherworldly and dangerous Night Court.

Cassian, the general of Night Court, is a ruggedly handsome winged warrior, whose position means that he and Nesta constantly runs into each other. He ignites her temper like nobody else can, but he also attracts her like a moth to a flame.

When the fragile peace is threatened and a new war looms on the horizon, Nesta and Cassian will be forced to battle together in order to halt the enemies of Night Court. However, the greatest risk the have to face is their burning attraction to each other.

This version of Sarah J. Maas' "A Court of Silver Flames" is a medium sized paperback.

Forfatter
Forlagets beskrivelse THE LATEST BOOK IN THE #1 BESTSELLING SERIES'With bits of Buffy, Game Of Thrones and Outlander, this is a glorious series of total joy' STYLIST___________________________Sarah J. Maas's sexy, richly imagined A Court of Thorns and Roses series continues with the journey of Feyre's fiery sister, Nesta...Nesta Archeron has always been prickly - proud, swift to anger and slow to forgive. And since the war - since being made High Fae against her will - she's struggled to forget the horrors she endured and find a place for herself within the strange and deadly Night Court. The person who ignites her temper more than any other is Cassian, the battle-scarred, winged warrior who is there at Nesta's every turn. But her temper isn't the only thing Cassian ignites. And when they are forced to train in battle together, sparks become flame.As the threat of war casts its shadow over them once again, Nesta and Cassian must fight monsters from within and without if they are to stand a chance of halting the enemies of their court. But the ultimate risk will be searching for acceptance - and healing - in each other's arms.___________________________Sarah J. Maas's books have sold millions of copies and been translated into 37 languages. Discover the sweeping romantic fantasy that everyone's talking about for yourself.