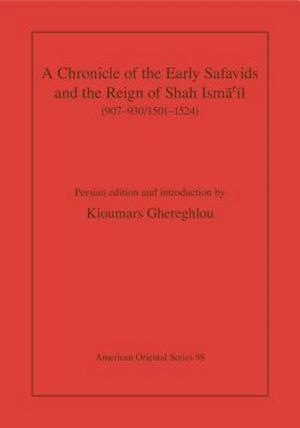 In this volume, Kioumars Ghereghlou presents an edition, with preface and indexes, of a previously unpublished sixteenth-century Persian chronicle. Written by Qasim Beg Hayati, a court scribe to Shah T ahmasp (r. 1524-76), it covers Safavid history beginning with the early part of the fourteenth century and closing with an account of Shah Isma 'i l's (r. 1501-24) rise to power and military campaigns in Iran. Dedicated to the Safavid princess Mihin Begum (d. 1562), whom Ghereghlou credits as Hayati's coauthor, the chronicle is composed of two parts. Part one deals with the predynastic phase of Safavid history and ends with an account of Shaykh S afi's life and career. Part two tells the story of the S afaviyya Sufi order, from the ascension of Shaykh S adr al-Din Musa b. Shaykh S afi (d. 1377) to the early years of Shah Isma'il's reign. Punctuating this account are two "tailpieces" (tadh'il), one on the history of the Safavid shrine in Ardabil in the fourteenth and fifteenth centuries and the other on the shrine's superintendents who held this post in the early part of the sixteenth century. This edition makes available for the first time a chronicle that had long been thought lost. Rich in new details about the S afaviyya Sufi order (t ariqa) in the fifteenth and sixteenth centuries, it is an important historical source for scholars interested in this period of Persian history. The text of the chronicle is presented in Persian, transcribed from the original manuscript. The editorial preface and bibliography are in English. The book includes four plates, in colour, showing sample sections of the original manuscript.