A Centennial Bibliography of Huntingtons' Chorea 1872-1972 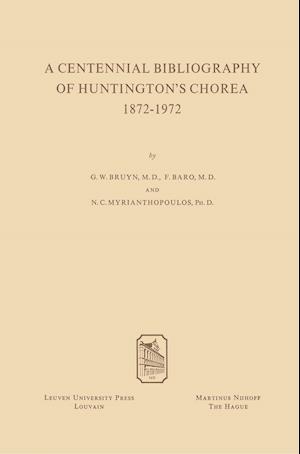 How this bibliography came about The Centennial Bibliography of Huntington's Chorea was prepared on the occasion of the Huntington Centennial Symposium which was organized by the World Federation of Neurology Research Group on Huntington's Chorea and was held in Columbus, Ohio, in April, 1972. The Research Group on Huntington's Chorea is one of many international scientific groups which operate under the auspices of the World Federation of Neuro- logy. The objectives of this Research Group are to aid the interchange of ideas and research findings in extrapyramidal disorders in general and Hun- tington's chorea in particular; to stimulate, plan and coordinate research efforts; to define problem areas and to seek out and encourage qualified in- vestigators to tackle specific problems; to establish registries, and to aid the exchange of genetic and genealogic information; and to coordinate rela- tions with lay groups interested in Huntington'S chorea. Although the Research Group does not as a body conduct or fund re- search, it has been singularly successful in achieving its objectives through a continuing series of workshops which invariably turn out to be highly pro- ductive and satisfying. Many members of the Research Group had collected and maintained, over the years of clinical and research interest in Hunting- ton's chorea, a considerable number of references and actual reprints per- taining to past work on the disease, and these were often exchanged and shar- ed within the Group. The collections of two of us (G. W. B. and F. B.