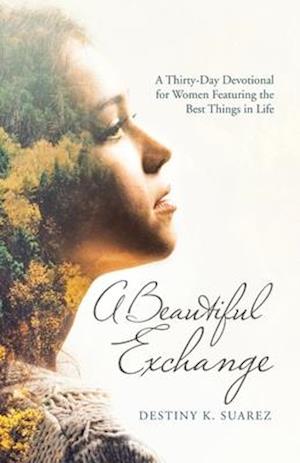 Do you ever feel as though you're not enough? Never quite measuring up?

In her new book, A Beautiful Exchange, Destiny Suarez recognizes that being a woman can be hard and exhausting. The world meticulously tells women how to act and what to do. All the while, making sure the outward appearance is worthy of a magazine cover.

As Moms, Daughters, and Sisters in Christ, you will see this book as a reminder of who you are in the Lord-purposed, chosen, and redeemed. More than enough. Hand-picked by the King and adopted into His royal family. Princesses, y'all!

This book dives deep into the heart of God, and how He feels about his daughters. It reveals the royal inheritance that will transform your life.

Each devotional defeats the lies of the enemy and will refocus your mind on who God says you are in Him, giving you victory in every season. You will confidently say, "It's been a beautiful exchange to choose God's way of thinking instead of the world's."

Between each devotional, is an opportunity to smile, chuckle, and reminisce as you read a featured "Best Things in Life" quote.