50 People Who Messed up the World 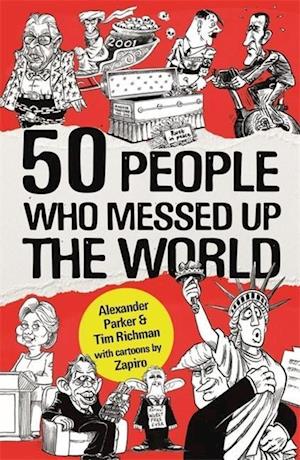 Who would top your list of the fifty people who have done the most to make the modern world a worse place?'I can't imagine how they whittled it down to just 50 people' - comedianNik Rabinowitz 'A fantastic thought-provoking book that renews my appreciation for history. It reminds us how we got here and how we can avoid things getting worse'Mandla Shongwe, SAFM Lifestyle'A fascinating, terrific read' Gareth Cliff, CliffCentral From despotic mass-murderers to sports cheats, and from corrupt politicians to truly dreadful celebrities, who has had the most damaging -- or vexatious -- impact in their particular sphere of modern life?This line-up of the very worst of the twentieth century and beyond includes the obvious candidates: those who have caused extraordinary damage through their murderous paranoia, brutal avarice, or demented self-regard -- Stalin, King Leopold, Idi Amin and the like. But murderous dictators aside, there are plenty of others who deserve recognition for their role in making the world a significantly more dangerous or, at the very least, more annoying place: terrorist Carlos the Jackal; Robert Oppenheimer, the man who gave the world the atomic bomb; notorious sports cheat Lance Armstrong; and the one and only President Donald Trump, who has of course succeeded in making the world both more annoying and more dangerous. This perfectly focused spotlight on infamy is illustrated throughout by award-winning political cartoonist Zapiro.

Forfattere
Bibliotekernes beskrivelse Who would top your list of the fifty people who have done the most to make the modern world a worse place? 50-100 illustrations