3D Delineation: A modernisation of drawing methodology for field archaeology 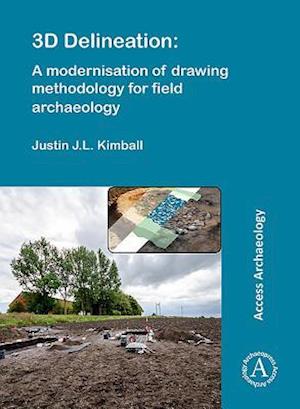 A recent trend concerning archaeological research has focused on producing a real-time methodology for 3D digital models as archaeological documentation within the excavation setting. While such methodologies have now firmly been established, what remains is to examine how 3D models can be integrated more fully alongside other forms of archaeological documentation. This work explored one avenue by developing a method that combines the interpretative power of traditional archaeological drawings and the realistic visualisation capacity of 3D digital models. An experiment was initiated during archaeological excavations at Uppakra, Sweden where photographic data was captured to produce 3D digital models through Photoscan. These models were geospatially located within ESRI's 3D GIS ArcScene where shapefile editing tools were used to draw overtop of their surfaces in three-dimensions. All drawings closely followed the single context method of drawing, were allotted context numbers, and given descriptive geodatabase attributes. This methodology resulted in the further integration of 3D models alongside other forms of archaeological documentation. The drawings increased the communicative powers of archaeological interpretation by enabling the information to be disseminated in a 3D environment alongside other formats of data that would have otherwise been disconnected in 2D space. Finally, the database attributes permitted the drawings complete integration within the geodatabase, thereby making them available for query and other analytical procedures. Archaeological information is three-dimensional; therefore, archaeologists must begin to approach documentation bearing this in mind. This technique has demonstrated that 3D models are a fluidic form of documentation allowing for accurate preservation of archaeology while enabling new forms of data to be derived all within a limited amount of time. Archaeologists must begin to affect change towards embracing 3D models and their associated applications as a standard tool within the excavator's toolbox.

Forfattere
Bibliotekernes beskrivelse How can 3D models be integrated more fully alongside other forms of archaeological documentation? This work presents a method that combines the interpretative power of traditional archaeological drawings and the realistic visualisation capacity of 3D digital models. Illustrated throughout in colour and black & white