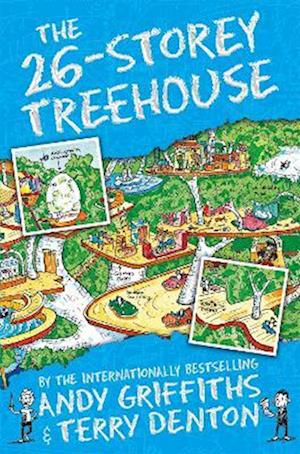 The 26-Storey Treehouse is the second book in Andy Griffith's and Terry Denton's wacky treehouse adventures, where the laugh-out-loud story is told through a combination of text and fantastic cartoon-style illustrations.Andy and Terry have expanded their treehouse! There are now thirteen brand-new storeys, including a dodgem-car rink, a skate ramp, a mud-fighting arena, an antigravity chamber, an ice-cream parlour with seventy-eight flavours run by an ice-cream-serving robot called Edward Scooperhands, and the Maze of Doom - a maze so complicated that nobody who has gone in has ever come out again . . . well, not yet anyway . . .This time, the two friends have a whole week to finish their next book, and Andy even knows what it should be about: the story of how he and Terry first met. But life is NEVER boring in the treehouse, and emergency shark operations, giant storms, and wooden pirate heads are just the beginning....Well, what are you waiting for? Come on up!

Forfattere
Bibliotekernes beskrivelse Laugh-out-loud wacky adventures in the world's most AWESOME treehouse! The second instalment in this highly illustrated series for fans of Diary of a Wimpy Kid and Barry Loser.