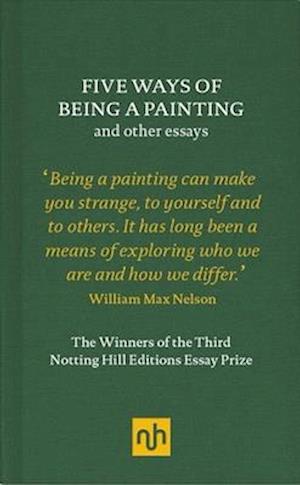 A collection of essays by the winner and the five finalists of the prestigious Notting Hill Editions Essay Prize 2017, which will be announced in June 2017 The biennial Notting Hill Editions Essay Prize is open to all essays written in English of between 2,000 and 8,000 words on any subject. The first prize is 20,000 and five runners-up each receive 1,000, making it the richest nonfiction prize in the world. The winner of the inaugural prize in 2013 was Michael Ignatieff, with his essay on Raphael Lemkin and genocide; the 2015 prize was won by the African-American author David Bradley, with his essay on the use of the word -nigger.- Authors on the 2015 prize long list included Hal Foster, Ben Lerner, Tim Parks, Iain Sinclair, Meghan Daum, and Rupert Sheldrake. Judges for the 2017 Notting Hill Essay Prize include Kirsty Gunn, essayist and novelist; Daniel Mendelsohn, essayist, memoirist and critic; Sameer Rahim, Arts & Books Editor of Prospect; Rosalind Porter, Deputy Editor of Granta; and writer and broadcaster Travis Elborough.In the words of Adam Mars-Jones, a judge and the chair of the 2015 prize, the winning writers -understand that it is not just what we see, but how we see it.- The essays demonstrate the dazzling literary range of the form. Notting Hill Editions is a British independent publisher devoted to restoring the essay in literary and commercial form. The company was founded in 2011 by Tom Kremer, the man responsible for discovering and licensing the Rubik's Cube.