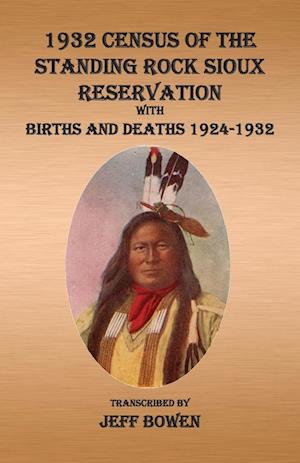 This volume is a combination of two different books, 1932 Census North and South Dakota Sioux on Standing Rock Reservation, North Dakota and the Standing Rock Sioux Reservation Births and Deaths 1924-1932, both by Jeff Bowen and originally published in 1996. This census for the Standing Rock Reservation was taken by Agent E. D. Mossman during this period. You will find within this volume a key at the top of each page that gives Census Number, Surname and Given Name, Sex, Age At Last Birthday, Tribe, Degree of Blood, Marital Status, Relationship to Head of Family, Jurisdiction Where Enrolled, Ward, Allotment, Annuity and Identification Numbers. There are approximately 6,800 names throughout the Census and Birth and Death Records. This volume has a new limited Index containing mostly women's maiden names and children's names that are different from Head of Household. There is also a new Introduction that covers a history for the Sioux from their forced removal from Minnesota to the violation of the treaties they had with the United States government from Fort Laramie in 1851 and again renegotiated in 1868 whereby losing a huge amount of their homeland. Also there is present day information for the Standing Rock Sioux and a link given so you can view a copy of the original Treaty of Fort Laramie, 1851.

There is a full Table of Contents and the Birth and Death Records are given per year according to the location either North Dakota or South Dakota. With the Death Records there is not only a year and census number with standard information but age at death and cause of death given.