111 Places in Berlin - on the trail of the Nazis 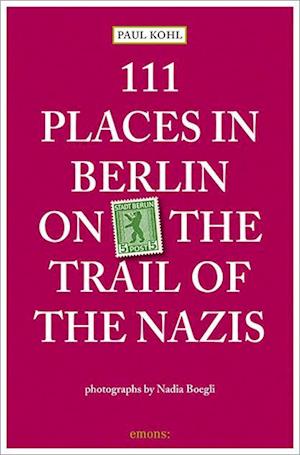 Although the singular brutality of the Nazi dictatorship gruesomely symbolises human ruthlessness beyond all boundaries, one meanwhile often searches in vain for its visible traces - the "Fuhrerbunker", Gestapo headquarters, or the Sportpalast have long since ceased to exist. Presumably less sensational witnesses of history as well as the "silent heroes" are thus all the more important. This special guide through "Brown" Berlin lends a voice to many of them: where swastika flags and yellow stars were manufactured, where the SS played soccer with skulls, how much deportation to Auschwitz cost the victims, who the other parties were who had an interest in the "final solution", where the Nazis hoarded their bars of gold, where Hermann Goring's extravagant wedding was celebrated, where Hitler's half-brother ran a restaurant, or what was taught in the Reich School for Brides. This book puts particular emphasis on which courageous Berliners concealed Jews in the face of mortal danger, or even dared to rise up openly against the Gestapo and the SS - often with success! - and which Jewish organisations saved the lives of children and others.A poignant city guide to places which must never be forgotten.

Forfattere
Bibliotekernes beskrivelse A guide to the city, with the emphasis on finding the remaining locations significant to the Nazis, and those who openly or covertly opposed them.