100 Things Giants Fans Should Know & Do Before They Die 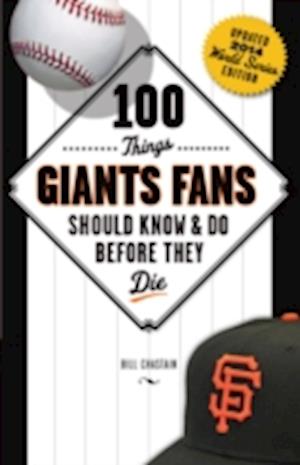 This updated edition features key moments and personalities from the 2014 championship season Most San Francisco Giants fans have taken in a game or two at AT&T Park, have seen highlights of Willie Mays' basket catch on YouTube, and were thrilled by the team's World Series wins in 2010, 2012 and 2014, but even the die-hards-those who remember which pitcher started the first home game in San Francisco's history, have attended a spring training game at Scottsdale Stadium, or know how many home runs Barry Bonds hit into McCovey Cove during his record-setting career-will appreciate this ultimate resource guide for true fans of the San Francisco Giants. For both boosters from the days of Bobby Thomson and recent supporters of Bruce Bochy, Matt Cain, and Buster Posey, these are the 100 things all fans need to know and do in their lifetime. Longtime sportswriter Bill Chastain has collected every essential piece of Giants knowledge and trivia, as well as must-do activities, and ranks them from 1 to 100, providing an entertaining and easy-to-follow checklist that leads the way to achieving fan superstardom. This updated World Series edition features the Giants' unforgettable 2014 season.